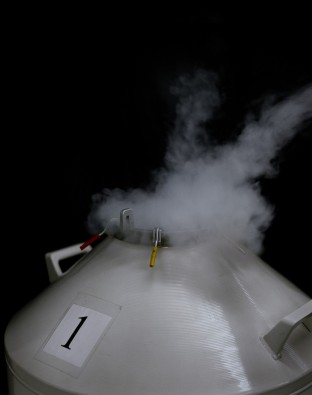 The documentary project Deposit, by the Swiss photographer Yann Mingard, confronts us with urgent questions about the bio-political and bio-ethical debates of our time. It also asks us to engage with complex issues involving the conservation, optimization, digitization, and storage of life forms.

Deposit focuses our attention on the present, sustainability, and future of life in the newest geological era, the Anthropocene, defined in The Encyclopedia of Earth as “human-influenced, or anthropogenic, based on overwhelming global evidence that atmospheric, geologic, hydrologic, biospheric and other earth system processes are now altered by humans.”

Completed between 2009 and 2013, the project makes visible how humankind collects, stores, and classifies both biological specimens and digital information that are usually hidden from public view. To enable this, Mingard brought back images from twenty-one locations, dividing them into four sub-chapters: Plants, Animals, Humans, and Data.

Mingard photographed the interiors of seed banks, vaults, research institutes, and laboratories, visualizing a wide array of issues in decidedly dark photographs whose details can often be discerned only upon closer inspection: medical instruments; data servers; cryogenic containers; human, animal, or plant samples; the interiors and (very rarely) exteriors of laboratories and archives. Unsurprisingly, gaining access to these locations was often a strenuous process in itself, demonstrating a paradoxical dialectic: in order for organic and digital data to be guarded and preserved, it must be deposited and contained in “black boxes,” often in underground locations.

Mingard’s photographs bring out the “darker side” of the scientific progress by which humankind has continued to tame and harness the forces of nature and subjugate them to our own analyses and power structures. Deposit asks us to confront and rethink these realities.

Depositis an institutional collaboration that was exhibited between 2014 and 2016 at Fotomuseum Winterthur (CH), Museum Folkwang, Essen (GE), Fotomuseum Antwerp (BE), and GwinZegal, Guingamp (FR).

Yann Mingard (1973) lives in Colombier, Switzerland. He worked as a horticulturist and gardener before studying photography at the Universities of Geneva and Vevey. Mingard has exhibited his work widely in Europe and published the following books: Ligne de Fonds (Scheidegger & Spiess, 2015); Deposit (Steidl, 2014); and Repaires (Hatje Cantz, 2012). He also co-realized a photographic survey of the EU’s Eastern European external borders with Alban Kakulya, culminating in the book East of a New Eden (Lars Müller Publishers, 2010).

Lars Willumeit (1974) is a German curator, social anthropologist, and photo editor. His interests lie in photography, documentarisms, regimes of representation, and visual cultures. From 2008–2013, he served as photo director of Du: Die Zeitschrift der Kultur. He lives in Zurich, Switzerland.