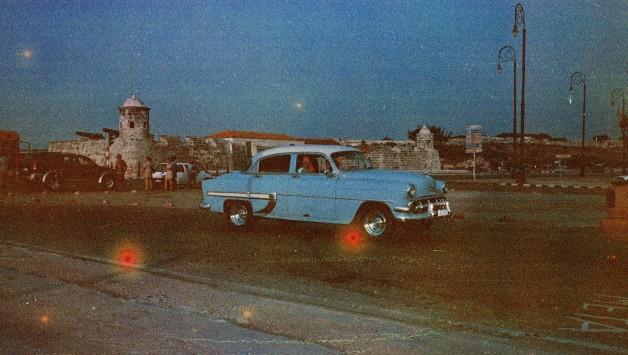 Klara Källström and Thobias Fäldt work in the field of photography, text, installation, and publishing. Their work focuses on the production of knowledge, exploring media issues, historical narratives, and the depiction and perception of political events. Over the years, Källström and Fäldt have produced a number of works relating to places undergoing paradigmatic changes; they seek to activate historical layers and notions of uncertainty and chance in order to draw attention to the gap between what is visible and what is told.

Walter Benjamin’s notion of “salutary estrangement” suggests a distinction between the visual and the image. In Källström and Fäldt’s work, this distinction is the gaze looking back at us, asking what we want from the things we are viewing. Through this activation of what is unresolved, the regime—that which we might call the habitual vision—becomes visible. In this tension, our desires unfold.

Together with the designer duo 1:2:3, Källström and Fäldt run B-B-B-Books, a publishing platform that engages in methods of narration and visual culture. In 2011, they started the ongoing project Wikiland, which revolves around the media image of Wikileaks founder Julian Assange. The same year, they initiated a series of works on the representations of the Greek crisis, starting in Athens during the general strikes in October. The series The Last of the Lucky began to take shape when they met with a former photographer of Fidel Castro, who put the last rolls of 35mm film on Cuba at their disposal.

The retrospective of Källström and Fäldt’s presented at Krakow Photomonth 2016 includes the Cuba work, which has never before been exhibited. This world premiere coincides with a crucial historical and geopolitical juncture, a handshake of pivotal importance.

Works of Källström and Fäldt’s are presented as a part of Imagineering—(Re)activating the Photographic exhibition.

Klara Källström (1984) and Thobias Fäldt (1978) have been working together for ten years. They are based in Stockholm but have produced most of their work while traveling: the liminality that travel creates is the site where their methodology takes shape. Most of their projects are published through their own label, B-B-B-Books, which they founded in 2011 in Stockholm with designers and collaborators 1:2:3. Källström and Fäldt have had solo exhibitions at galleries and institutions around the world, including Fotografiska (Stockholm), CULT Exhibitions (San Francisco), Pingyao International Photography Festival (China), CFF/The Center for Photography (Stockholm), VERKET (Stockholm), Trafó House of Contemporary Arts (Budapest), The Popular Workshop (San Francisco), and Gallery VU (Québec City). They have participated in group exhibitions at the Swedish Institute (Paris), Hasselblad Center (Gothenburg), LACMA (Los Angeles), Aperture Foundation (New York), and, most recently, Kunsthal Charlottenborg (Copenhagen). Their work has also been published in numerous photography anthologies around the world.