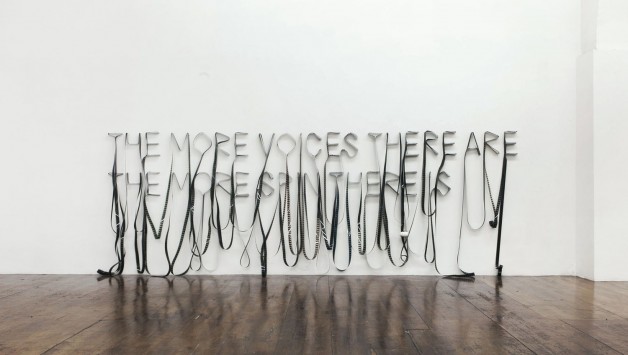 We live in a society that has fully embodied the neoliberal vision of a global and homogeneous world. Thanks to the increasing substitution and dismantling of the political apparatus, power is now concentrated around giant transnational corporations: a form of power both liquid and absolute in its capacity to be omnipresent and, consequently, omnipotent.

Along with the creation of a global production system in which we are inescapably involved, the greatest achievement of contemporary market economies is their ability to make us believe that power can be in our hands. The new regime asks little and gives us much in return, above all freedom: to consume, to appear, to communicate. Thus has cognitive-cultural capitalism progressively transformed information into control and commodification.

Driven by the rise of communication technologies, images play a crucial role in the maintenance of this capital-driven ecology. Contemporary images, far from simply mirroring reality, invade and expand our world and the way we perceive it. Transcending representation, they embody transient desires and needs; seduced by their alluring surfaces, we become one with them. Images are our alter ego, idealized projections of our being and our expectations. We trust them, and therefore we embrace the ideology that generates them.

Based on these premises, the works presented by Discipula in Imagineering—(Re)activating the Photographic revolve around the appropriation, postproduction, and analysis of images captured from the flow of daily production and consumption. Stock photos, renderings, and advertisements are manipulated and immersed in new networks of signs, languages, and cross-references in which the original function of each image is subverted, creating space for new interpretations, meanings, and uses.

While stressing the centrality of the notion of connectivity in our society, each work can be compared to a dynamic system in which ideas are laid out and negotiated through the interactions among matter, forms, values, and ideologies. By highlighting the fluid and mutable nature of contemporary images, Discipula ultimately aims to invite the viewer to look at and reflect on what is hidden beneath the glossy surface of the visible.

Works of Discipula are presented as a part of Imagineering—(Re)activating the Photographic exhibition.

Founded by MFG Paltrinieri, Mirko Smerdel, and Tommaso Tanini in 2013, Discipula is a collaborative research platform operating in the fields of contemporary photography and visual culture. Combining art practice and self-publishing, Discipula delves into the production, use, and consumption of images, and explores the interweaving of fact and fiction in the process of meaning-making. Discipula’s works have been exhibited internationally at the Mücsarnok (Budapest), FORMAT InternationalPhotography Festival(Derby), Photo 50 – London Art Fair, and elsewhere. Discipula was the recipient of the 2015 Author Book Award at the Rencontres d’Arles Festival.