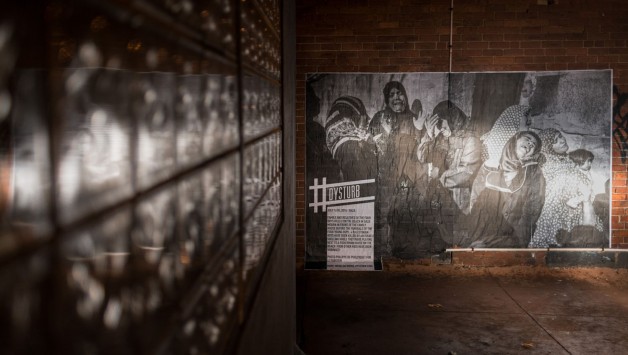 Instead of restricting photojournalism simply to print or digital platforms, as is currently the norm, we decided to think outside of the box and attempt to widen the audienceviewingthese images. As you may be aware, the diminishing readership of traditional media outlets, coupled with declining advertisement revenues and loss of credibility, has resulted in a rapid decrease in investment in photojournalistic stories—and in photojournalists.

#DYSTURB was founded in the hope of making these news stories accessible to the general public. Adopting techniques from urban street culture, we paste large-format photographs on the walls of city hubs, presenting photojournalism in a way that is both innovative and completely independent of the restrictions of conventional news publishing channels. Not only are long-form captions included in the pasted imagery, but these photographs, along with information about the photojournalist responsible, can also be readily accessed through our geotagging app.

#DYSTURB is a free platform relatively unconstrained by conventional press formats and channels. Our mission is simple: we want to be a platform that supports photojournalists and the photojournalism industry as a whole. The continuous and insatiable news media cycle means that history is unfolding before our eyes, yet the general public is unable to process it. Through #Dysturb, we hope to disrupt that cycle, acting as an educational tool that accurately portrays and conveys the experiences captured by photojournalists.


#DYSTURB has one rule: to feature only international news stories. We aim to raise awareness and to open minds beyond the beaten path of 24/7 national news.

IN THE TWO YEARS since we initiated this project, we have built a broad community of photojournalists, journalists, graphic artists, and volunteers. We have started operations in most major cities around the world, and developed lasting relationships with international educational facilities.

#DYSTURB was launched in March 2014 and has already conducted numerous poster campaigns. The reaction has been positive, with passersby responding well and pedestrians asking for more; respect has been shown as well, with the posters left undamaged on the walls. #Dysturb has displayed some 500 photos taken in 30 countries by more than 250 photojournalists worldwide.

for #Dysturb involved pasting 70 historic photographs—taken on 5 continents by 44 photographers of 20 different nationalities—throughout Paris in celebration of the 70th anniversary of the United Nations. Photojournalists and the United Nations officiate in all fields of crisis, on the one hand to witness and challenge, and on the other to protect, assist, and accompany those suffering from war, poverty, hunger, climate change, or human rights violations.

DURING COP 21,
#Dysturb and the Magnum Foundation joined forces to raise awareness by pasting 25 photographs, specially prepared for the event, throughout Paris. As always, the idea was both to inform and to provoke dialogue. The Yale School of Forestry and Environmental Studies actively participated by enriching the captions of each picture with statistics on climate resilience, environmental justice, and urban governance; another actor, Twilio, developed an SMS interaction system for the occasion that allowed passersby to hear the photographer tell the story behind his image. Finally, New York University Tisch School of the Arts helped us create a virtual-reality experience that allowed users to walk the streets of Paris and discover the photos, perpetuating this simultaneously ordinary and ephemeral experience.

#DYSTURB IS AN INTERACTIVE, EDUCATIONAL TOOL that provides storytellers with a platform completely independent of the restrictions of conventional news publishing channels. Recently, we have increased our focus on the educational aspect of photojournalism, documenting not only current events that impact a country’s foreign policy but also events that have significant historic value.

Not only are we working with schools in Europe, but we have also forged partnerships with facilities in Australia and New York. Each month we post current imagery and students discuss the events surrounding it. We have also recorded photojournalists’ accounts of the “story behind the image,” which helps to contextualize the imagery.